Hello folks. This week we have a really delightful post from Mark again. He’s got a totally different approach to this writing than I do with mine, so the change, I’m sure, is refreshing. The only bad part is that he is making the rest of us (read: me) look bad. I can say that at least my writing has more typos, so if we’re going for quantity then I win on that count.

If you’d like to read more of his posts for me, you can see them here: 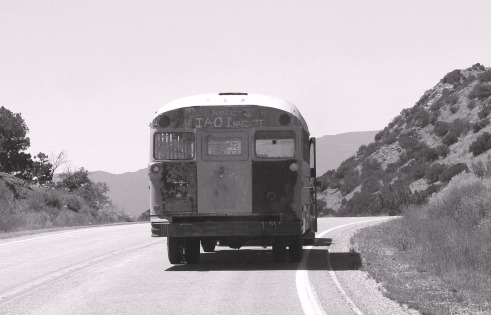 We hear this a lot: “Know your students.” This typically means that we need to know about our students’ learning styles and strategies, and it can be extended to include their particular interests and motivations for learning. When we know our students – and when our students know us, I’d add – there are some fairly obvious benefits for everyone concerned, but upon further reflection some relevant questions come to mind: Beyond what I’ve mentioned above, how much can we really know about our students? How much should we know?

The reason these questions have been kicking around in my head this week is because I recently ran across a piece of writing by a twenty-two-year-old native English speaker living with a host family in Costa Rica. He was a college student, and he’d been having a bad day. Here’s what he wrote:

I’ve heard about smoking guns before, but smoking buses? That’s what I was in coming back from San Jose today. As the bus began its climb up a very steep hill, blue smoke came pouring out from under the back seat. It was raining outside, but we opened the windows anyway. The rain had let up some, so we didn’t get wet and we didn’t suffocate.

Friday I have a quiz over a book I don’t have, notes I don’t have, and possibly a pamphlet I don’t have. Today is Tuesday. There are no classes tomorrow (another holiday); Victor is bringing me his notes on Thursday. I looked for the book in San Jose and San Pedro today but failed. I’m getting a little worried.

I’m sure that’s one reason why I’m upset tonight. A lot of things are bothering me. I have bugs in my room again; I hope I can sleep tonight. I wanted to take a shower, but someone beat me to the bathroom. Now I don’t care about it. I answered the phone and couldn’t understand what the other guy said. He started speaking English. I thought after two months I would know more. I don’t think I’m learning very much. I feel like a failure.

Worst of all, I don’t have anyone to talk to. Even if I did, I’d probably have a hard time explaining my feelings. I need someone to lean on right now. I need to cry on a girl’s shoulder.

I did try to accomplish one thing today. I bought some Crazy Glue so I could try to fix the radio. I glued the knob on this afternoon, but it just broke off again. I think the radio situation is hopeless. It’s really not my fault that the tuning knob gave out, but still, I’m the one who broke it off. I failed again.

I’m the guy who was usually picked last for the games at recess. They’d stick me in right field where the ball never came, and would let me bat about once while the others had three or four at-bats. Maybe that’s one reason why I’m a quiet guy now. There’s nothing more humbling when you’re a little kid.

As you’ve probably figured out by now, the student I’m quoting here is me, thirty years ago. I was living in Costa Rica, and apparently I wasn’t having such a great time of it; my journal writing in English was my psychological outlet. What’s really scary is that I honestly don’t remember feeling this horrible or insecure, and I can’t believe I wrote this stuff. It’s been too long to remember. I sound like I needed some serious counseling. I was living in an entirely different reality when I was young.

So here’s my point: I’m a teacher now, and most of my students are about the same age I was in 1985. In order to really know my students, I don’t have to know (and probably shouldn’t know) what’s going on in their personal lives, but I do have to understand that they’re living in a different world than I am. They’re young. I’m not. No doubt circumstances are different now than they were years ago, what with all the communications we have now, but their emotions might be about as intense as mine apparently used to be. As a teacher, I need to understand that some days they really might not be able to just speak up and participate in a discussion. They’re experiencing what one of my friends from grad school, Scott Jarvis, once described as “weather fronts.” The idea is that when you’re living in a foreign country, weather fronts come through, and sometimes you just have to wait out a storm. The cold fronts seem to come periodically and you feel terrible, but they’re always followed by warm fronts. Students will have good days and bad. We teachers need to understand that.

There’s one more point to consider here before I close, and that involves personality. I was someone who played chess and worked with stamps and otherwise didn’t talk to people much. It was never easy for me to force myself into a conversation when I was younger; in fact, I still have some trouble with that. This is one area in which today’s technology can help. I’m far from an expert on using technology to help students learn, but I have no doubt that students like me, or at least the version of me that I’m reading about in my old journal, would benefit greatly from “having someone to talk to” online or making a podcast in a language lesson. It would help their language learning, but it might also help them in other ways.

So let’s get to know our students, but let’s cut them some slack too. They’re young, and we need to be understanding. Let’s give them outlets like blogs so they can express themselves. And when their cold fronts come through, let’s assure them that warmer days are ahead.